Before it’s too late and no longer topical, I wanted to share a list that has been floating in my mind for a while.  On Sunday night, the Academy welcomed Jennifer Lawrence and Anne Hathaway into their club.  Now, they can join Daniel Day-Lewis and Christoph Waltz in adding the phrase “Oscar Winner” before their name is mentioned.

But within the next 10 years, who will join them in the pantheon of acting?  I have a few suggestions… 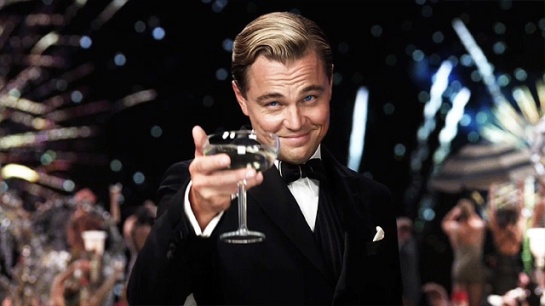 COMMENTARY:  With the boy-next-door turning into a renaissance man as he heads behind the director’s chair, JGL is headed towards golden child status.  Now it’s just time for the Oscars to catch up.

COMMENTARY:  I don’t really think I need to elaborate here as Gosling is one of the emerging Hollywood leading men.  The only thing keeping him from an Oscar, in my mind, is his eclectic role selection.

COMMENTARY:  As one of the highest-wattage stars of the past decade moves into a slower, more retrospective phase of his career, the role that will land Brad Pitt his Oscar should materialize.

COMMENTARY:  Yes, Clooney has already won his Oscar(s).  But I am convinced he will win his trophy for a leading role as he is such a prominent leading man in Hollywood.

COMMENTARY:  Though as of late Linney has been more television oriented, I still don’t think the cinematic community is done paying its dues to this talented actress.

COMMENTARY: If “Game Change” had been released in theaters and not on HBO, Moore would have her Oscar.  It’s been over a decade now since her last nomination, but I don’t think that means the impetus to give her award has disappeared.

COMMENTARY: She’s a new Hollywood “It” girl.  Once she lands the big and flashy role, she will get an Oscar.  (Heck, they had her announce the nominations this year, something usually reserved for prior winners/nominees.)  She’s a beloved figure with all the charm and accessibility of Jennifer Lawrence with a little more polish and refinement. 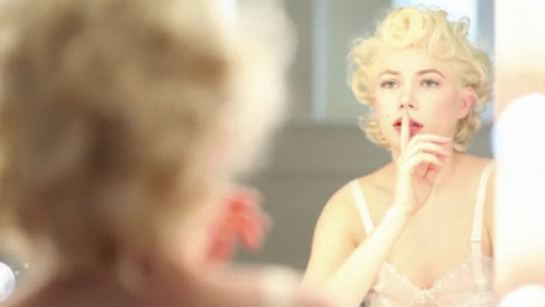 COMMENTARY: Williams showed she had some serious range in “My Week with Marilyn.”  Not that her mopey characters weren’t good, but now we know she’s the real deal.

What do YOU think?  Who else is destined for Oscar glory in the next decade?

Well, folks, hard to believe that today is the Oscars.  The day we all await always manages to sneak up on us, blind us with an ephemeral flash of glory, and then recede to let us feel its impact for a year.  Tonight, the industry will speak about what they believed to be crowning achievements of cinema.

So today seemed like the perfect time for both myself and Lawren, a/perture’s curator, to weigh in on what we thought were the best films of 2012.  You are welcome to go to my own personal blog to see a more detailed analysis of what made these movies work for me and also get a numerical ranking.  For ease of reading today, however, we settled on a simple alphabetical ranking. 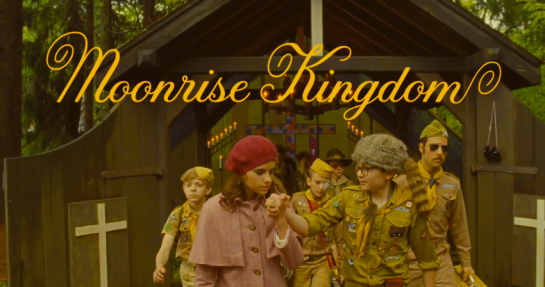 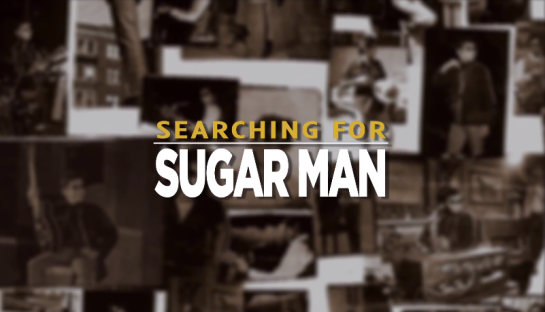 So often, films about illness and death are milked in a rather maudlin fashion for tears, sentimentality, and catharsis. None of those things interest Michael Haneke though. His latest film Amour is set almost entirely in an octogenarian couple’s apartment where the wife is slowly headed to the grave after a debilitating stroke. He chronicles the slow descent with patience and control through a deliberate and patient lens that doesn’t dare cut out the messiness, monotony, or misery. 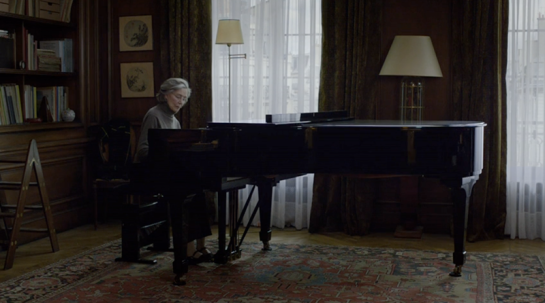 It’s the cinematic equivalent of a still-life as this film treads delicately amplifies the deliberate pace with long shots and even longer takes. While such a technique might infuriate a viewer if it were employed on a different subject matter, those willing to stick with the movie to the end should ultimately admire the tightly controlled and delicately constructed film. At times, it can be fairly difficult to watch … but how hunky-dory do you want movies about death to be? How can you even begin to comprehend the ennui of watching someone slowly lose their grip on life when you are treated to watch from a coolly removed distance?

What I found to be particularly interesting about the film was how Haneke shoots the film in such a straightforward and unambiguous fashion, an apparent change from the intricate machinery behind his puzzlers Caché and The White Ribbon. In a way, such a style wouldn’t make sense for Amour, but I do think it serves another purpose as well. It makes the audience complacent and allows Haneke to really put an emphatic exclamation point on the end of a cinematic sentence that doesn’t seem to require such an emphatic punctuation.

The performances from French veterans Emmanuelle Riva and Jean-Louis Trintignant as the ailing wife and her husband are impressive in their control and their naturalism, as is Haneke muse Isabelle Huppert as their grief-stricken daughter. But Amour is definitely a Haneke showcase above all, a movie that may seem familiar at first but inextricably bears his stamp.

This past weekend, I was watching what used to be my favorite show on television, Lena Dunham’s Girls.  I loved the unapologetic honesty and authenticity Dunham brought to the show.  Even though I have yet to reach the age requisite to have the kind of experiences she explores in such depth, I related so deeply to the characters and their struggles. 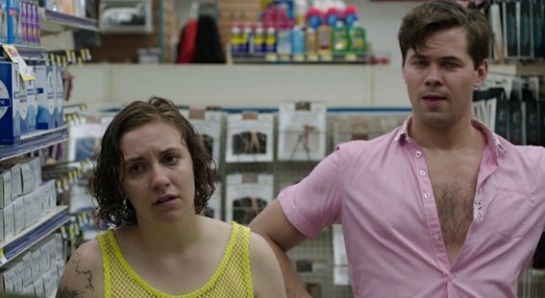 Season 2, on the other hand, has been an absolute nosedive to the point where I wonder why I even watch the show anymore.  After talking about it with some friends, I came a conclusion as to why I might be so averse to the show this year.  Dunham is totally pandering to her critics!

I don’t know how closely you followed the controversy surrounding the show last year, but its creator/director/writer/star faced accusations of narrow-mindedness, privilege, racism, and many other things.  And by introducing several gimmicks to address these concerns, she has addressed these concerns.  However, it has come at the cost of the integrity of the universe she created on Girls. 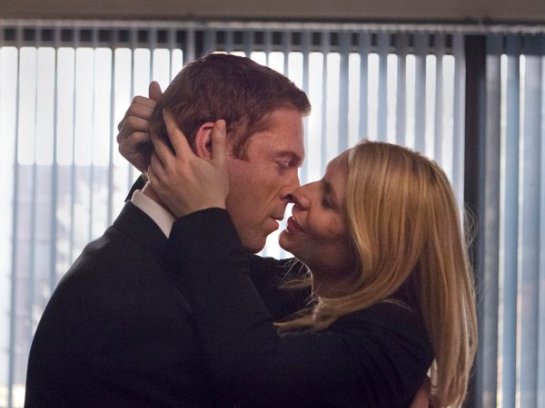 I had similar issues with season 2 of Homeland.  While the first season was a slow burn leading up to a pulse-pounding finale of feature-length proportions, the second season was disappointing because it lost the tension.  The show and its fans got a taste of action, so now Homeland stuffs its face with it.

A part of me wonder if the vicious feedback loop of Twitter and other social media are to blame.  With more immediate access to viewer reactions than ever before, television shows can adapt to their audience in the blink of an eye.  Heck, CBS’ Hawaii Five-O just aired an episode where Twitter reactions decided the ending of the show in real time! 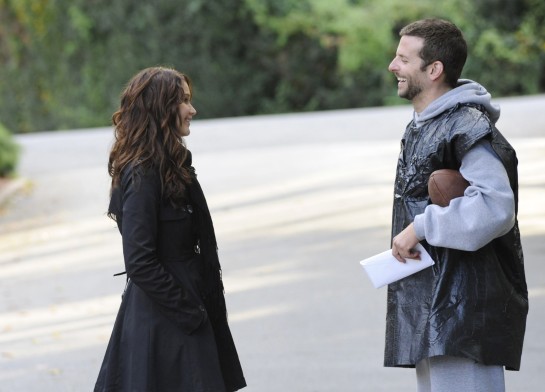 It would be a half-truth to claim that film is created in a vacuum.  There are plenty of times in the production process where audiences are given a chance to share their input; I experienced this personally over the summer when I got to see a rough cut of Silver Linings Playbook which was noticeably different than the version now playing at a/perture.  (And lest we forget, audience reaction and turnout largely determine what gets made in the first place.)

But there’s something about the completeness of a narrative without much audience intrusion that makes film such an exciting medium.  The artists get to make their products in much more of a vaccum, free from instantaneous opinion that can alter the entire course of the story.

Can you imagine if Twitter reactions determined the course of Silver Linings Playbook?  We might not have gotten a chance to see the soft side of Jennifer Lawerence’s Tiffany if she the audience initially despised her character!

So while I enjoy television shows, I will take a movie any day of the week.  Unless we are talking Breaking Bad, in which case the game changes totally.

If you haven’t come to see the Academy Award nominated short films at a/perture, you are really missing out.  It’s understandable if you need to catch up on your other Oscar nominees, like for Best Picture (Silver Linings Playbook has feelings too, as will Amour next week).

But when you are filling out that Oscar ballot, the three short film categories could make or break your picks for 2012, especially since so many categories are hotly contested.  Having a leg up on these categories could be give you bragging rights for a year.  Plus, don’t you want to say you’ve seen them and know which one actually deserves to win?

Beyond practical use of this knowledge, there are also plenty of aesthetic and artistic reasons why you should see these short films deemed worthy of a shot at Oscar glory.  It’s easy to discriminate or dismiss because they aren’t feature-length films.  Don’t get me wrong, 2012 Best Animated Short Film nominee Fresh Guacamole is fine craftsmanship, but do its two minutes even compare to the beauty of Rust and Bone?

That’s an easy way to write them off, but I encourage you to give them a chance and see what they have to offer.  Short films are often a great training ground for future talents.  Directors from Stanley Kubrick to Steven Spielberg to Paul Thomas Anderson got their start in short films; in a few years, who know what these nominees will accomplish.

For example, in 1978, Taylor Hackford won the Academy Award for Best Short Film (Live Action) for Teenage Father.  Within five years, he had directed An Officer and a Gentleman.

And if you complain about movies being “too long” as they are now, these short films will meet you where you are!  Sometimes, a narrative is best when it can be expressed in a few minutes.  Why spend two hours watching something develop when you have these superbly made films that pander to our short attention spans?  Enjoy the easy-going simplicity of Disney’s Paperman and feel the entire emotional experience of a film in six minutes!

Not to mention, plenty of important stories need to be told on film but simply do not have enough meat to sustain feature length.  Take last year’s nominee God is the Bigger Elvis – a fascinating short documentary that provided a satisfying and complete story in little more than 30 minutes!

So what are you waiting on?!  Get to a/perture to check out these Oscar-worthy films … we don’t want to get short with you or anything, but you really do need to see these!