Because of the way the film awards season works, January and February are largely void of new independent and art-house releases.  The studios want to give you plenty of time to see Silver Linings Playbook and Amour while Oscar fever grips your attention.

But now, the films of 2012 are breathing their last at a/perture.  This past weekend, we opened Emperor, our first film from 2013!  While we still have Quartet, technically a 2012 release, we are anxiously looking forward to some great films gracing our screens in the next few months.  Many think the beginning of the year has nothing much to offer; this year will prove them wrong.

With the major studios having so many heavyweights in the Oscar conversation, the smaller studios held back a lot of their prestige fare.  So many 2012 fall festival favorites are headed your way soon, as are some Sundance darlings.  In other words, there is a whole lot to look forward to at a/perture!

You’ll start seeing some other major 2013 films pretty soon, too.  If you’re a fan of Oldboy, then you have to come check out Stoker, director Park Chan-Wook’s English-language debut.  Acclaimed out of Sundance, it will creep into a/perture on March 22!

And just because they didn’t win their respective Oscars does not mean that The Gatekeepers and No are not worth seeing.  Both are important and timely political pieces, the former a documentary on Israeli-Palestinian relations and the latter a fictional film about the use of advertising to overthrow a dictator.  Look for these around April and then come on over for a history lesson and a show!

When it premiered at the Toronto Film Festival last fall, many speculated The Place Beyond the Pines could shake up the Oscar season.  Well, Focus Features chose to wait until spring 2013 to release the film they bought for several million dollars.  Something tells me that we will still remember the towering performances of Ryan Gosling and Bradley Cooper come next winter.  And maybe this multi-generational crime epic will maintain its Best Picture buzz too.

Another TIFF title generating a lot of heat was director Robert Redford’s The Company You Keep, a film that has an ensemble cast with Oscars to spare.  This political thriller looks taut and intense … perhaps the new Argo?

Venice saw the premiere of To the Wonder, which had many scratching their heads in the same way as Malick’s last film, the Palme d’Or winner and Best Picture nominee The Tree of Life, did.  Some critics said it was even more experimental and avant-garde.  You have to come see it just to experience how on earth that is possible.

Then, before you know it, we will have SUMMER MOVIES!  No, I’m not talking about Iron Man 3, I’m talking about it’s art-house equivalent Frances Ha.  I’ve heard it described as Girls meets Woody Allen meets French New Wave.  In other words, pure bliss.  And it’s directed by the Noah Baumbach, a frequent Wes Anderson collaborator.

I’m So Excited will be coming later in the summer from Sony Pictures Classics, although this teaser trailer will surely show you that you will not be getting the same kind of Almodóvar film as The Skin I Live In.

Two others that you can expect in the summer have no video footage, but the production stills alone ought to excite you.  The first is for Before Midnight, the sequel to Before Sunrise and Before Sunset.  Lawren and I have both seen the film – her at Sundance, myself at SXSW – and we both have nothing but praise for it.  You won’t want to miss it. 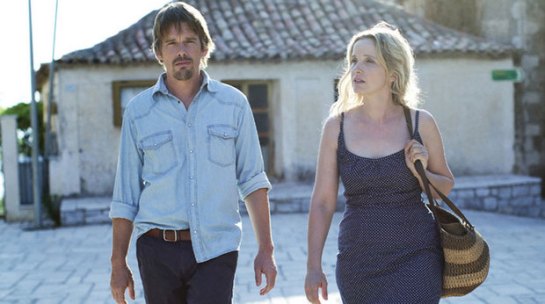 Meanwhile, no one has seen Blue Jasmine, Woody Allen’s annual flick.  We don’t quite know what to make of this one.  The Cate Blanchett expression in the still hardly looks comedic, but the presence of comics like Louis C.K. and Andrew Dice Clay in the cast lead us to believe it will be very funny.  So who knows?!  It’s a Woody Allen movie, so you have to come see it anyways!

So if you haven’t started your freakout about what a great year we have ahead of us, start now.